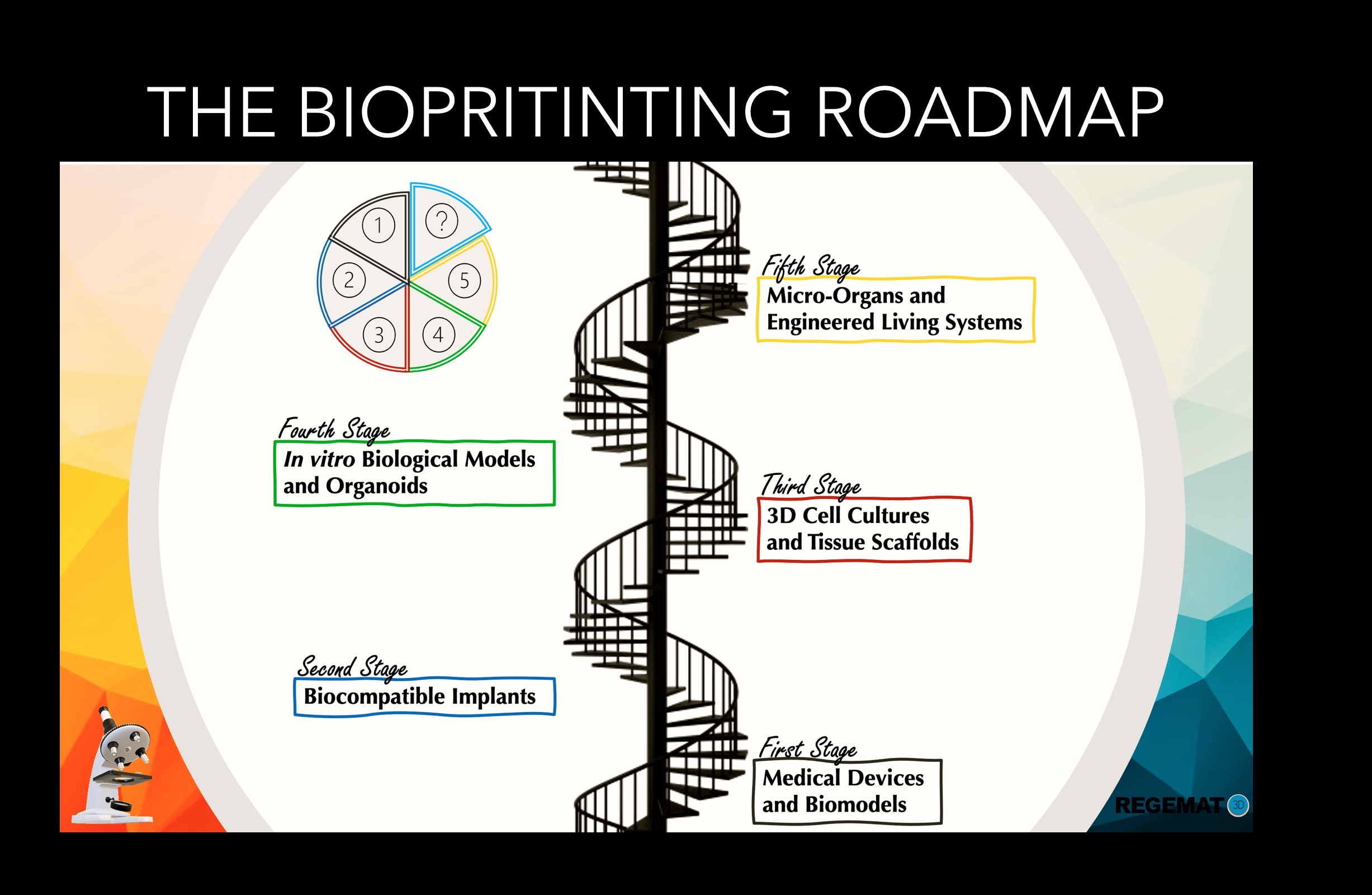 FROM AN EMERGING TECHNOLOGY TO A RESEARCH AND MEDICAL REVOLUTION

Current 3D printing technologies have found several applications in a large part of technological and even industrial areas, and its use and potential in the fields of science and medicine is increasing. It is precisely in these fields, in which due to its particularities, 3D printing has evolved giving rise to the so-called Bioprinting. The capacity to generate on-demand and customized pieces adapted to each patient and medical condition, has enabled these technologies to constantly discover new ways to benefit human health, in a relatively short period of time. In this sense, it is important to highlight two major events in the 3D printing and Bioprinting historical roadmap. First, the successful use in the clinical setting of biomodels, surgical guides and implants made from 3D printed inert materials, gave rise to the ambitious idea of creating full body parts and organs, by combining biological components within the 3D printing processes. Second, the vision of obtaining bioprinted living tissues opened much more realistic yet outstanding approaches to fabricate human-like constructs, which have revolutionized scientific methodologies in the areas of disease modeling, drug testing and discovery, and ultimately regenerative therapies. As one of the first companies in the world to materialize the biomedical potentials of 3D printing into real solutions, the scientific and engineering team of REGEMAT 3D has not only always followed the milestones achieved in the field, but also set up the trends in terms application, and more importantly, the personalized user experience of this revolutionary technology.

From a detailed perspective, the Bioprinting roadmap has covered a wide spectrum of advancements from cell expansion and novel bioink development to cell/stem cell printing, from organoid-based tissue organization to bioprinting of human-scale tissue structures, and from building cell/tissue/organ-on-a-chip to biomanufacturing of multicellular engineered living systems.

In less than half a decade, the number of projects, publications and laboratories working in this area has grown exponentially, validating bioprinting technologies in a wide variety of lines including tissue regeneration of brain, bone, cartilage, cornea and skin, disease modeling of complex pathologies and tumors, toxicity assays in liver and cardiac tissue, as well as drug screening for the efficacy of novel therapies. Although these advances show an invaluable potential to satisfy current unmet medical needs, there are still important steps to take, which will be essential while releasing the potential of basic science into therapeutic applications of stem cells, allowing production of more tissue‐like structures. In this regard, biomaterials play a key role. As the main components of the 3D bioprinted structures that create extracellular matrix environments for appropriate tissue architecture development, they have gained important attention during the last years. Biomaterials must have certain characteristics that guarantee viability and cellular functionality during and after the bioprinting process. Generally the materials used for bioprinting are hydrogels, which are three-dimensional networks of natural or synthetic polymers. In this sense, REGEMAT 3D has partnered with numerous research labs and institutions experts in the field of biomaterials, with the aim of developing superior quality bioinks for tissue culture that ensure reproducible results throughout multiple experiments. As a result, the company now offers an extensive portfolio of products, including widely used GelMa, Collagen, Alginate and Nanocellulose bioinks or more advanced formulas as blended polymers of hydroxyapatite and polylactic acid.

So what´s next? Our team of experts has the clear idea that in order to accurately recreate living tissues through bioprinting technologies, there is just one perfect machine to imitate: human biology. Several studies have already shown the self-assembly capacities of multiple types of cells while creating functional models. This demonstrates how the cells do the work themselves, developing the minute structures characteristic of a particular organ through their inherent, ‘hard-wired’ programs. Moreover, these same intrinsic competencies enable the ‘manufactured product’ not only to self-assemble, but also to self-repair, adapt to changing conditions, and even potentially to self-replicate. However, the outstanding abilities of cells to self-organize into complex 3D networks are only viable when providing the right environment, which allows the cells to perform their inherent functions. That is why the research and development strategy to generate new technologies at REGEMAT 3D has as main reference the naturally occurring process of tissue formation: combining cells types connected into matrices of protein-based networks, to then follow a functional process of maturation by applying different chemical and physical stimuli. The newest line of products of the company is based on bioreactors that imitate human´s anatomy and physiology with the clear objective of creating the appropriate environment for the bioprinted constructs to do the right functions. This not only goes a step forward into the process of biofabricating human parts, but also opens a whole new line of knowledge and research possibilities while obtaining cellular resources at large scale, and studying the behavior and evolution of tissues under these specific conditions.